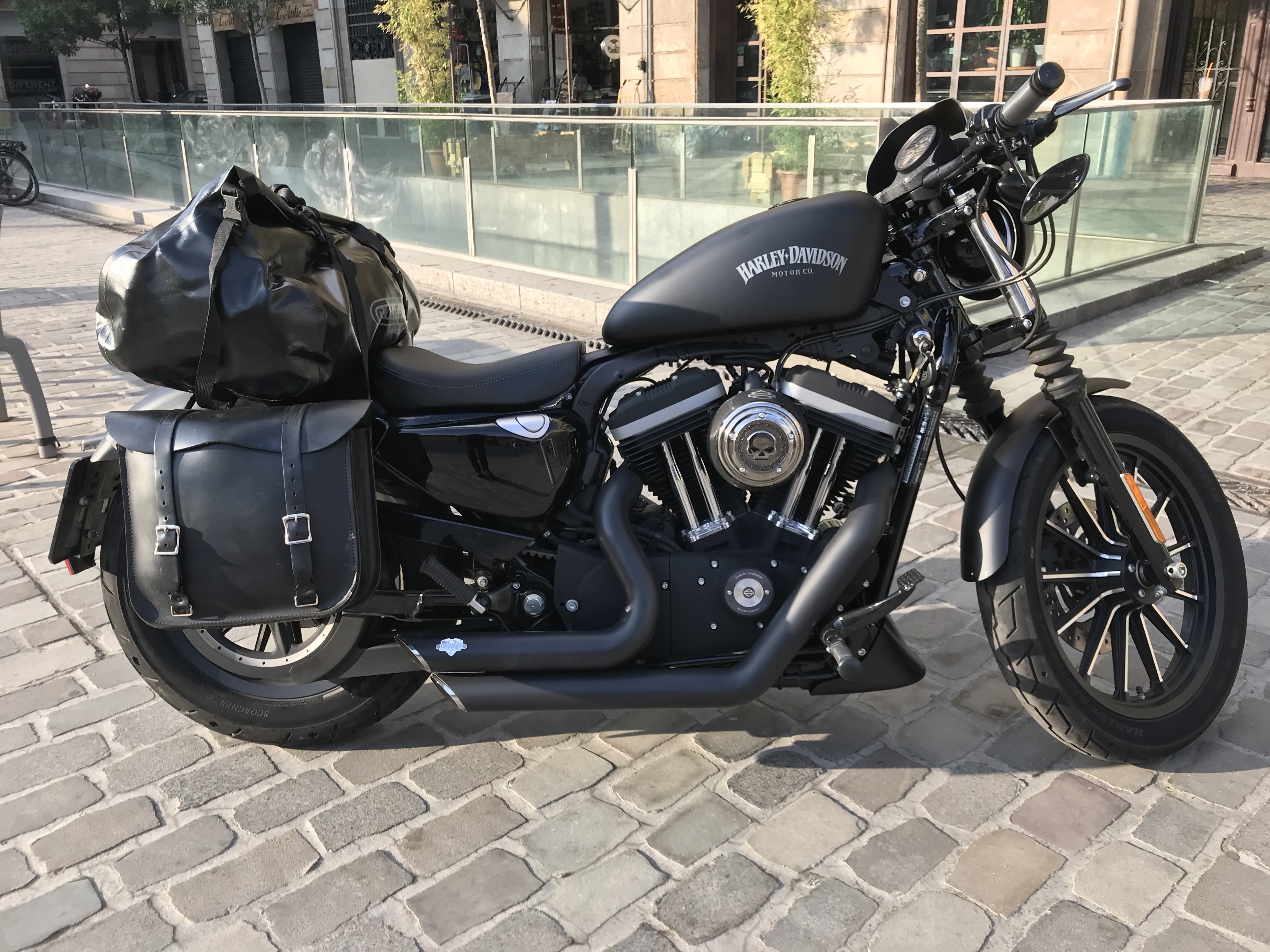 This is the 3rd road trip with my Sportster, the first time I went straight from Barcelona to Germany for a 3 week vacation, the second time I toured around mostly through Austria with my girlfriend and this time it was a 4 week extended, unplanned trip through the Italian Alps, with Bled (Slovenia) as final destination.

The first trip I only had a backpack with me, second time the 2 saddlebags fit clothes for 2 people for 2 weeks and this time I added a Ortlieb bag for camping stuff, that’s all for one person (sleeping bag, mattress and tent were kind of big and everything was used at least once, so not too bad).

I’d like to share the trip and some tipps and tricks for long motorcycle tours, hope it helps someone or is at least entertaining to read.

First things first, gas station! After filling up the bike and on my way back from the counter, I found a big puddle of gasoline just under my bike, and the bike still dripping. Naturally, I freaked out, put the bike aside, left the motor running and the gas was sprinkling all over the place. I went straight back to my Harley dealer (25min the other way) to hear, that this is normal with a black tank. If you fill up too much (which I did for the past 3 years), the liquid expands by the heat and drips out at the bottom of the bike. Took me another 35 mins to get back to where I was before, means I lost 55 minutes because I didn’t check my bike before the trip.

Beside that, there wasn’t much excitement that day. Average 110 km/h on the highways from Barcelona as far as possible towards Italy. Red Bull really helps to concentrate on such a long ride, I can highly recommend that when you’re getting tired. 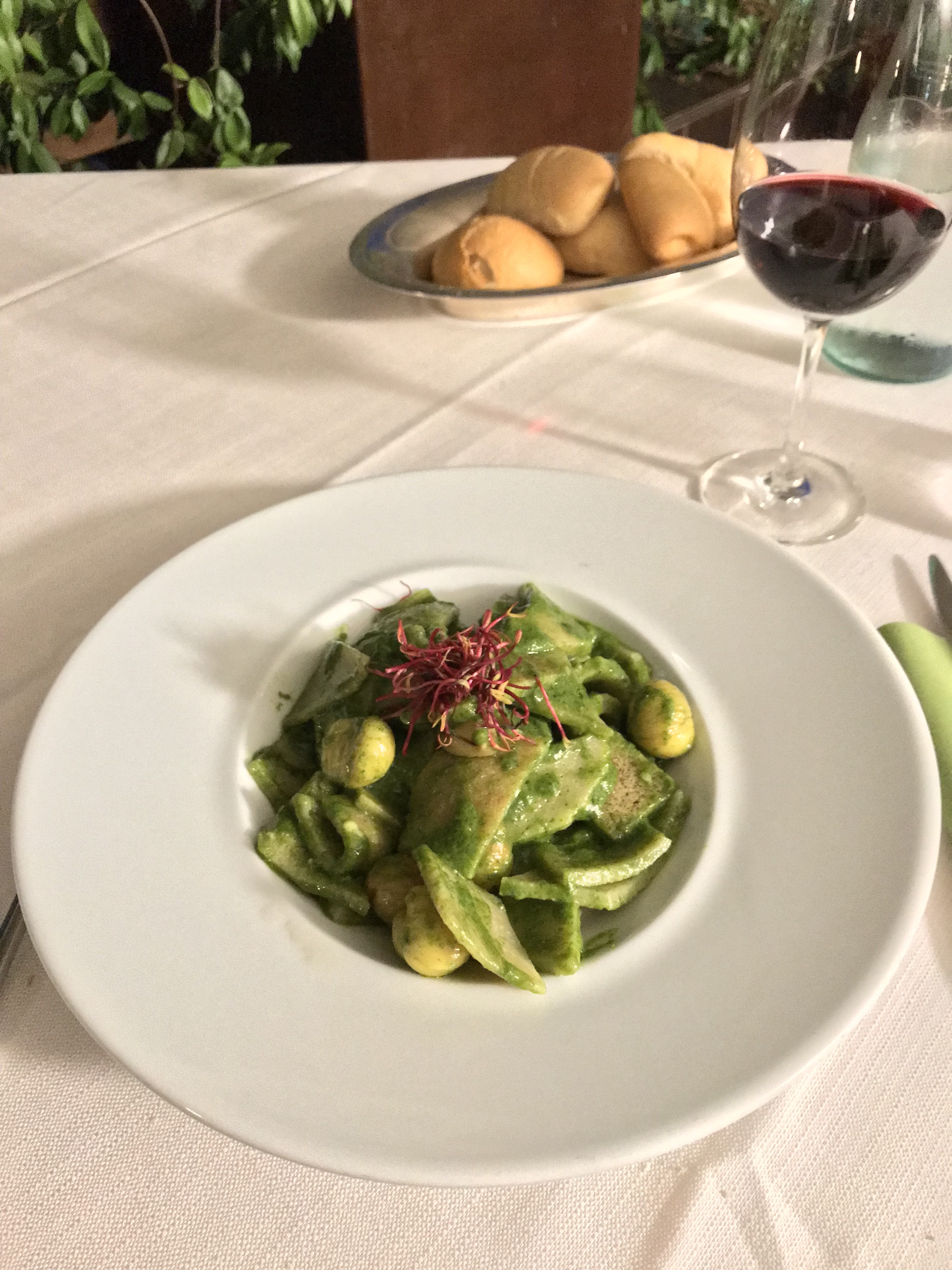 I stayed at Hotel Poggio for 75,-/night, as I was too tired to find something cheaper and the hotel was just 1 minute off the highway. The room was on booking.com for 100,-/night, that was when I learned in most cases you get a better deal when you go to the hotel and ask for a room (booking.com takes a cut, so they save the commision and you can get a cheaper deal). Dinner in the restaurant was amazing, breakfast not so much (not even the coffee, which is kind of hard to find bad Espresso in Italy).

Learnings of the day: 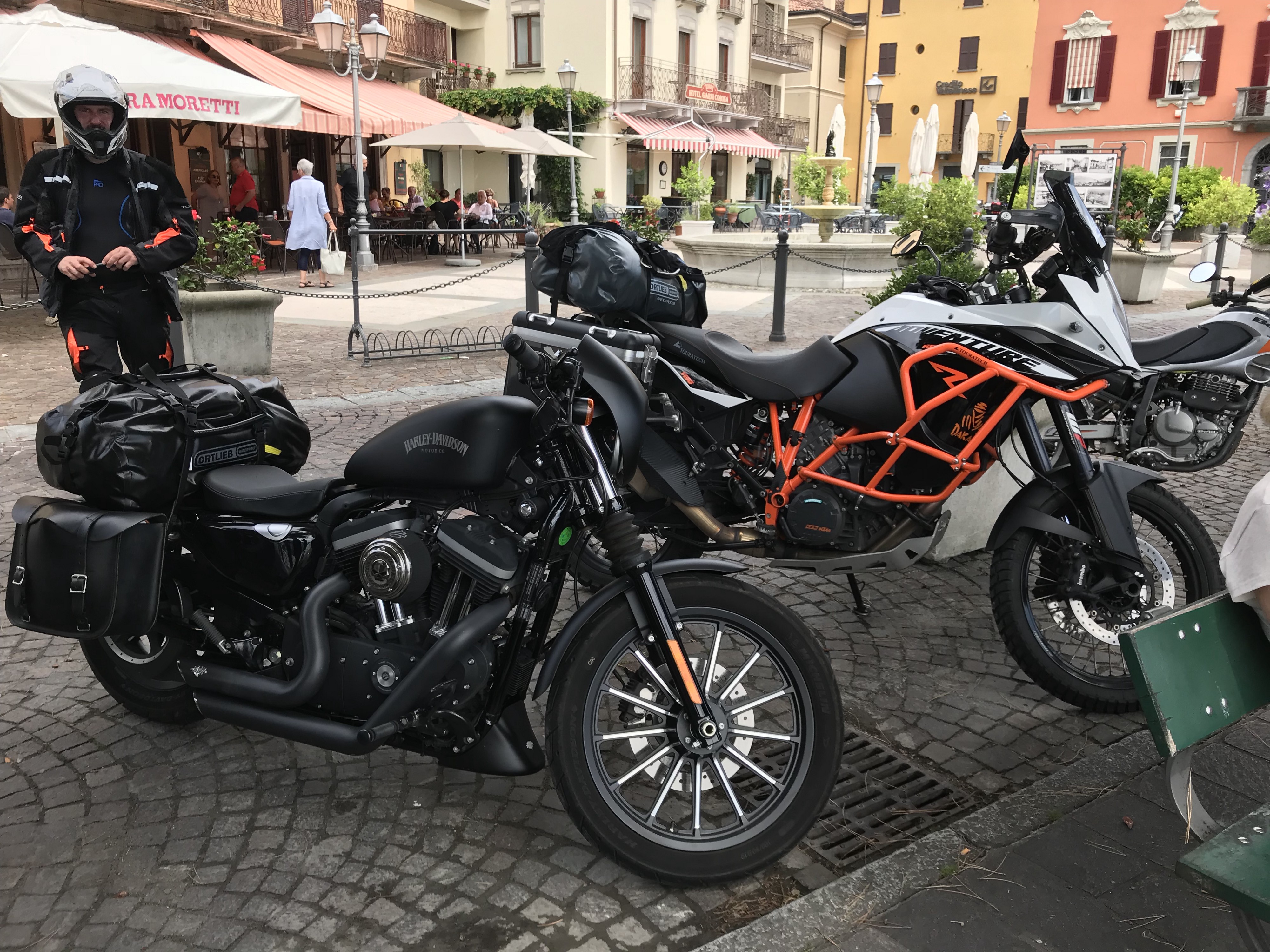 The meeting point we set before the trip with Joe was in Menaggio, near the Como lake. Unfortunately, Joe already made it there the day before, so he was sitting around, sipping Espressos while I had another ~300km to go from Arenzano. A few drops of rain caught me in the morning, but that‘s about it. Via Milan I got to Menaggio fairly straight forward, with the last 20km being a slow ride through an endless number of villages, but at least with a nice view on the lake at most times. After catching up on Espresso in Menaggio and with a rain warning for the day, we decided to head out towards Livigno. The initial plan was to ride mostly in Switzerland and Austria, but the weather didn’t let us, so we stayed on the south side of the Alps. ViaMichelin suggested to take the route on the Italian side, as there was rain forecast for Sankt Moritz (Switzerland), but the GPS decided otherwise and sent us straight to Switzerland over mountains and along lakes and waterfalls; a stunning first alpine overpass, without rain. Sankt Moritz was quite something. Since I’ve never been there and didn’t know much of the rumours about this place, this was exciting. Massive palaces, expensive cars, and loads of sail boats, wind- and kite surfers on the lakes, at 2pm on a cloudy Tuesday afternoon.

Once in Switzerland, I immediately got a text message from my mobile provider Orange: 34,60 Euros for roaming in Switzerland (I didn’t even use my phone). Thanks to the new EU regulations, I had roaming enabled the whole ride and completely forgot about it, as my data plan is now valid in all EU countries. EU countries, not Switzerland. And therefore they cash out right away for every single byte you use. Some more twisting, exciting roads later we stranded in Livigno. To my surprise, gas was less than 1 Euro per Liter and we figured we‘re in a tax free city in Italy just across the border from Switzerland. As it is in these little places, there‘s usually no warm kitchen between 2pm and 7pm, so it took a while to find an open restaurant (Restaurant below Hotel Sporting). And, to no surprise, the pizza was amazing. We spent the night in Hotel Sporting for 60,- in a double room (7,- cheaper than advertised on booking.com). 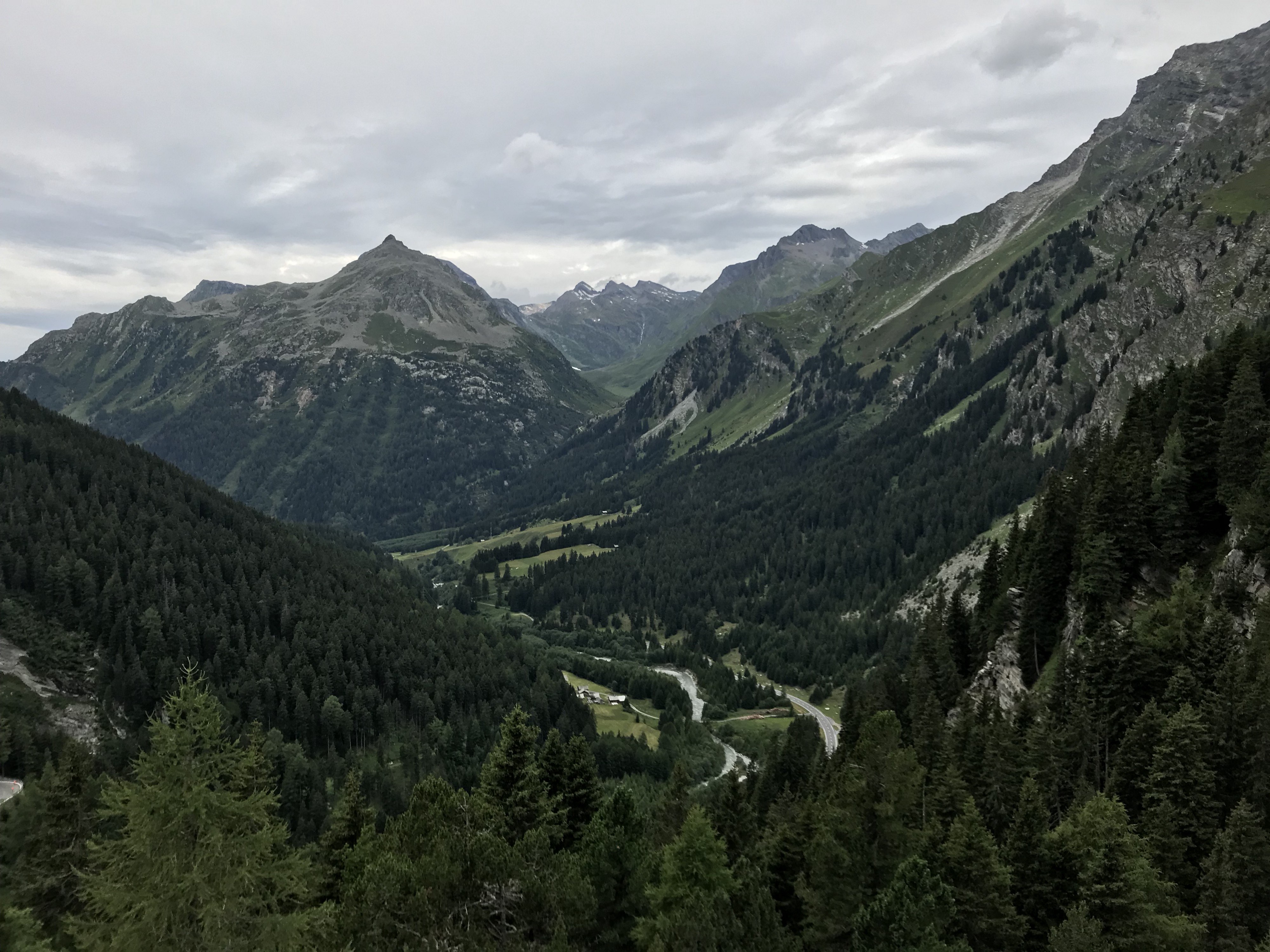 Learning of the day: 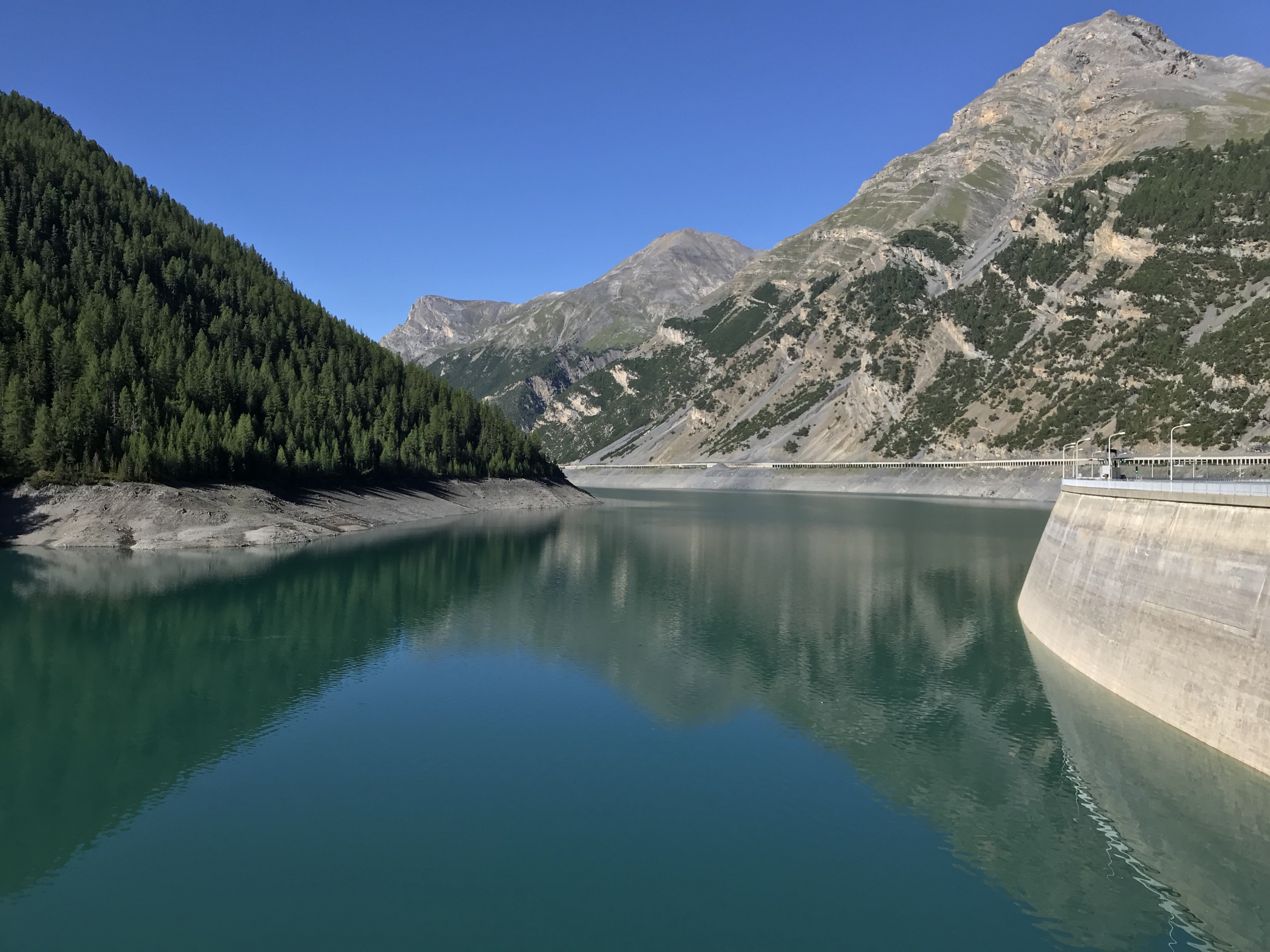 The day started with an amazing breakfast in the Sporting Hotel. They provided a juicer with apples and carrots; fresh fruit and eggs were the perfect carb-free breakfast for a healthy biker. We started around 8.30am in Livigno. After a quick stop for gasoline (95ct!! per Liter) and tax free cigarettes, we headed through a private tunnel (12 Euro toll, total rip-off) to Switzerland and over the „Ofenpass“. After a few sharp turns the pass offered long curves for a nice roam. Joe decided it‘s time to switch bikes and try out the Harley Davidson spirit, while I tested his KTM 1200 beast. However, after a few kilometers we were both happy to go back to our ladies. 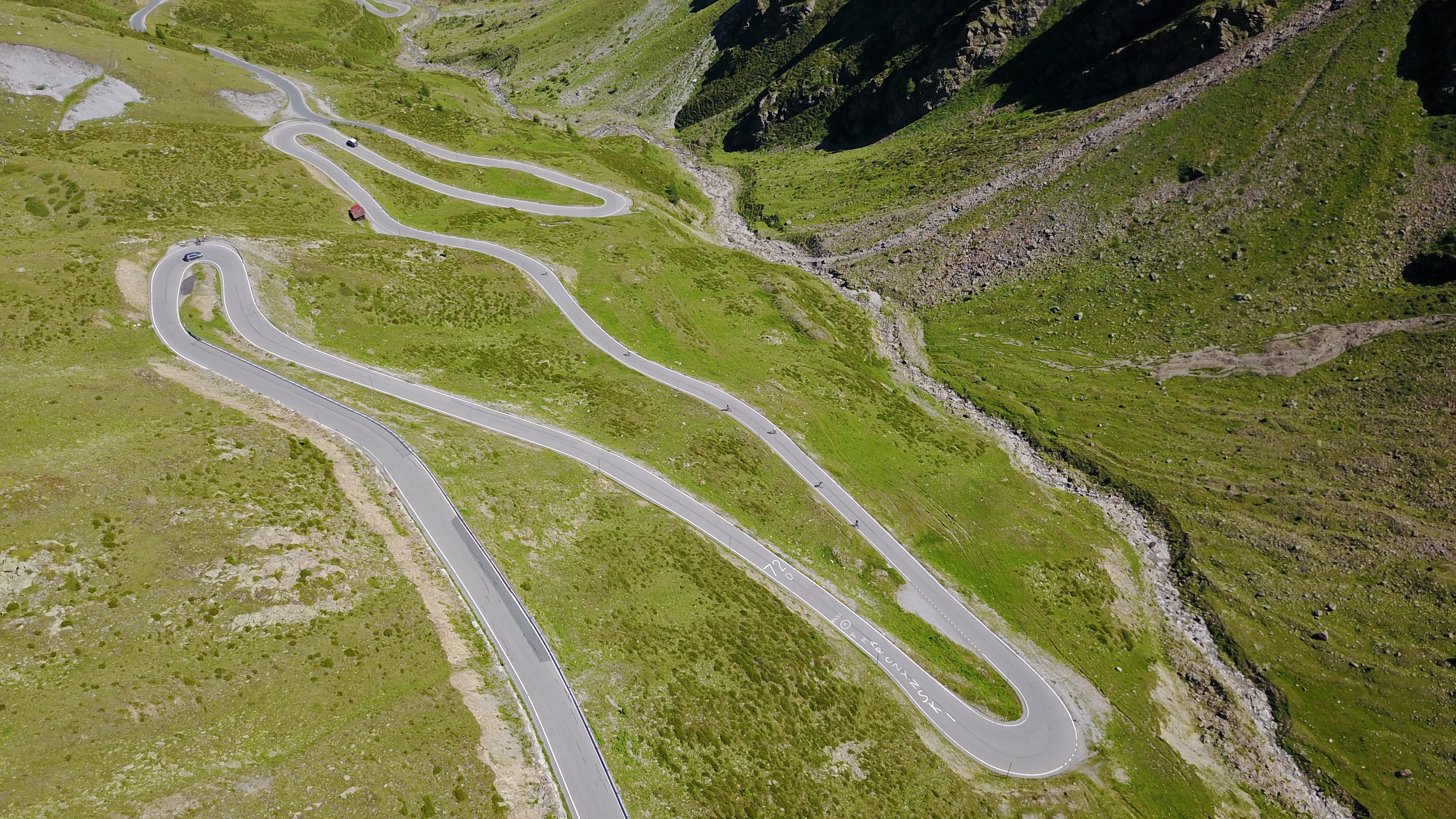 In Santa Maria Val Müstair we turned right into the Umbrail Pass which then leads to the Stelvio Pass and the „Stilsfer Joch“, an amazing road of sharp turns and views to glaciers. There’s a bike stop at the peak, offering sausages, snacks and beverages together with a great view, which we skipped as we were afraid it would rain that day. After the pass, we turned on SS38, which was a long and boring ride mostly with 70kmph speed limits through the valley down to Merano, where we decided not to continue to Austria because of the weather forecast, but stay in Italy as chances of rain were less.

In La Villa the rain caught up with us and accommodation was too expensive in this area. We found a refuge only „5km away“, which turned out to be an hour ride, as booking.com shows air line distance, not driving distance. On a cold and rainy ride from La Villa to the mountain refuge we stayed overnight, we also had an accident where Joes bike slipped away in a curve. Luckily nothing serious beside a few scratches. At 7.30pm (13 hours journey!) we arrived safe and sound in the „Refugio Capanna Bill“ and had again nice dinner and stunning views from the balcony. Breakfast was rather simple, but they served eggs and fruits on request. Rooms were quite modern. Price was 60,- per room, this time with booking.com as most other rooms were already gone and we freaked out with the rain. 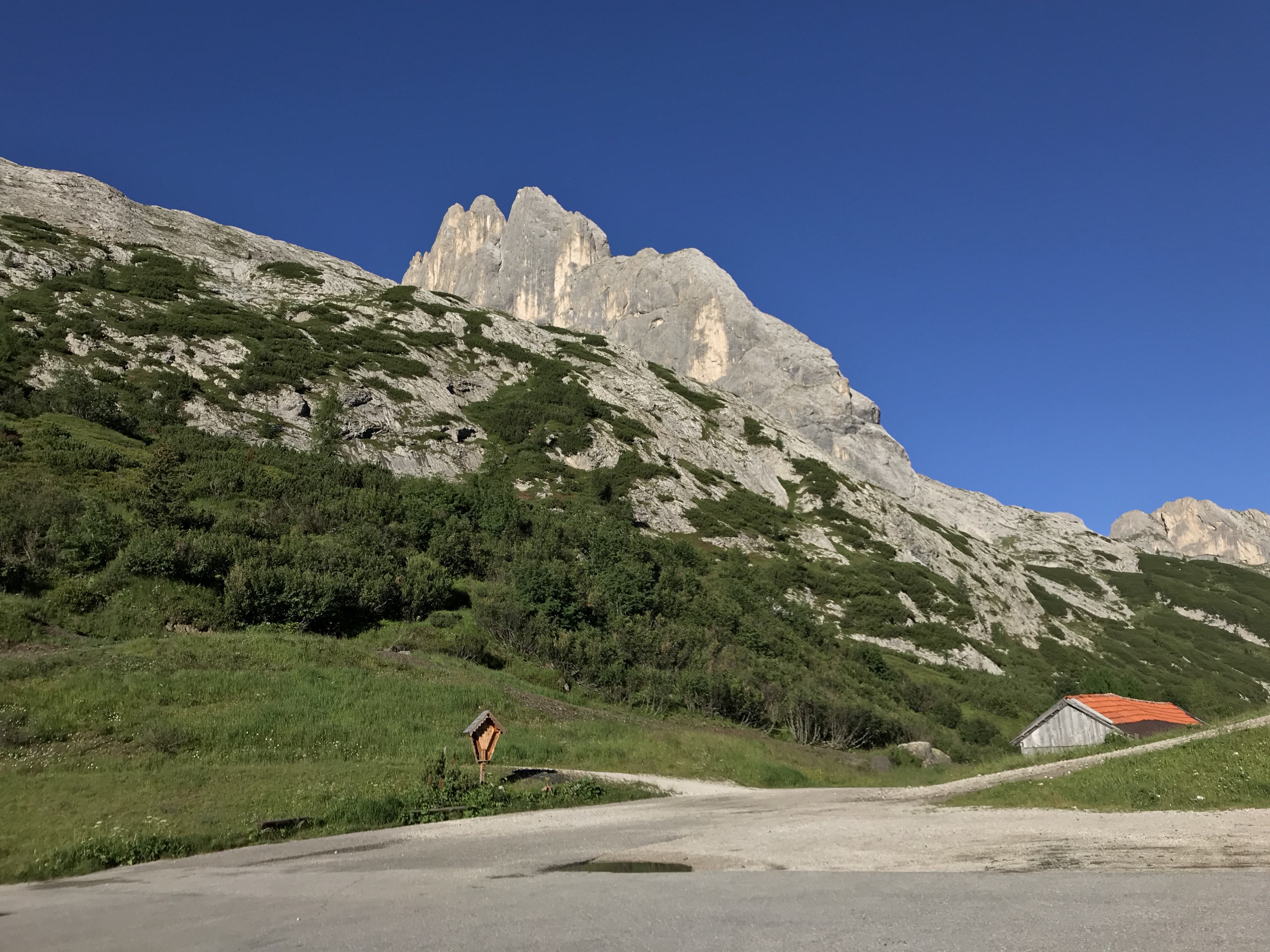 Learnings of the day

Sport! We finally did some sport! Since the refuge was directly in the mountains, the day started this time with a hike up to the Fedaia lake. After breakfast, we continued along the Passo di Fedaia towards Canazei, then took the next alpine pass Passo Pordoi and Passo Fúrcia (Furkelpass) before heading towards Austria. Unfortunately, the Staller Sattel overpass to Austria was closed, so it took us a long, boring D-tour on a motorway to Lienz. 40km north of Lienz lies Heiligenblut, the entry to the Großglockner alpine road.

This is a must-do, despite the 25,50 Euro toll, the views and curves are totally worth it. Ascending from Heiligenblut, there’s a turn-around right after the toll station. Head left first towards „Großglockner“, that windy road isn’t on the map and leads you to the Glacier and a fantastic view. Afterwards go back and head towards Edelweiss. Unfortunately it was extremely foggy and cold, so we had to turn around after the Hochtor tunnel and didn’t get to see the Edelweiss viewpoint. We ended up in the Pension Bergkristall in Heiligenblut for 45,- per person, with a nice room and view, but very basic breakfast. In Austria, most prices are usually per person, not per room! 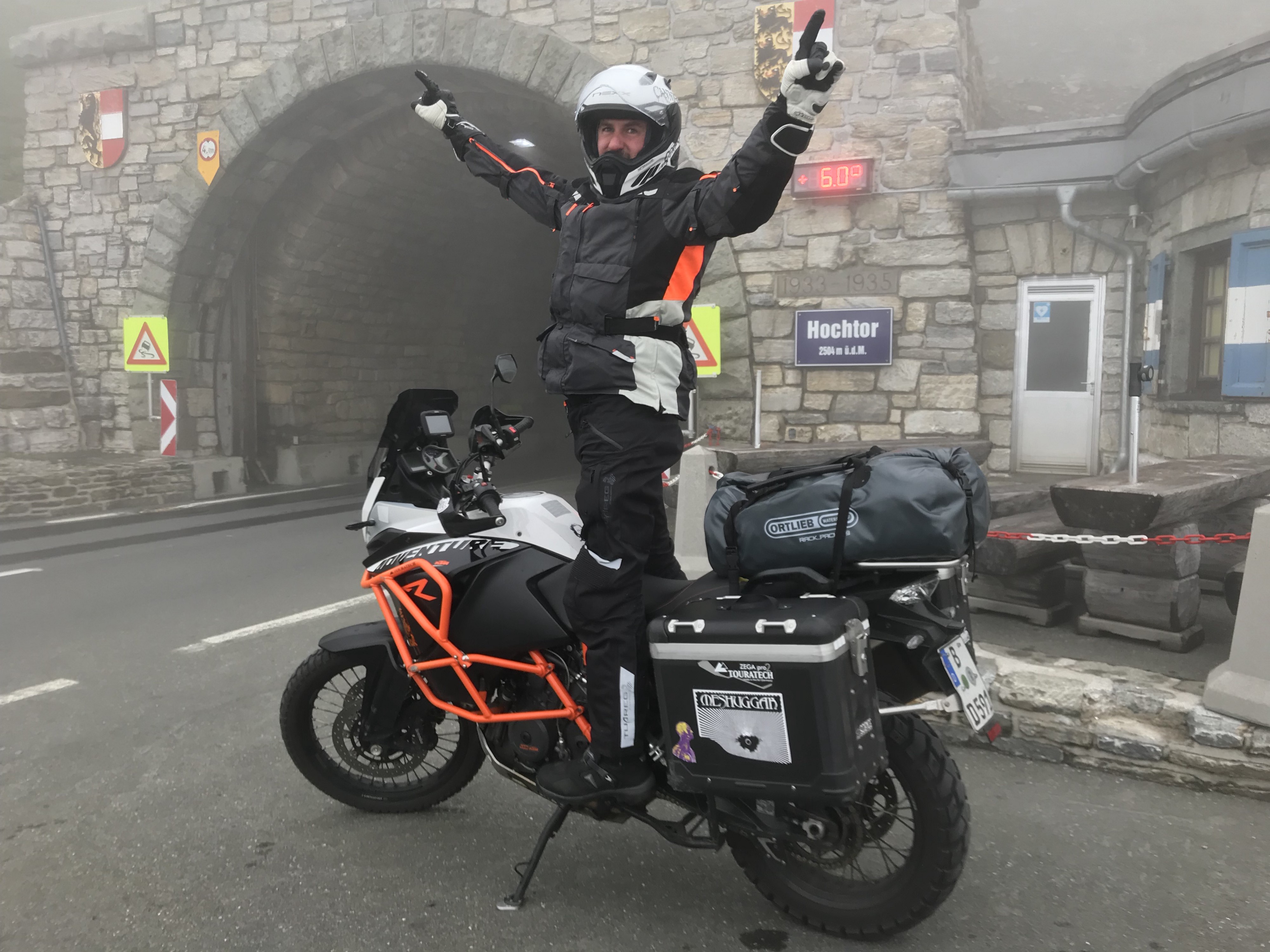 The road from Heiligenblut towards the Nockalm is about an hour long cruise through The Shire: green valleys, rivers, nature. Overall a very relaxing start and good thing we took it easy as some policemen were hiding behind trees for speed checks. In Gmünd we stopped for a coffee, weather predictions weren’t good in any direction, though we decided to go on and get to Villach before the rain started. This day we weren’t so lucky and the rain started just as we entered the Nockalm valley. 11 Euros toll pays you cinematic views in the Nature park. Wet streets and a slow ride meant more time enjoying the surroundings. The rain stopped at some point and a little while later we arrived dry in Villach, where a festival took place and all hotels, hostels and rooms were booked out. Since Austria is quite expensive, we took off to Slovenia instead, passing over the Wurzenpass with very bad road conditions and over the border to Slovenia. 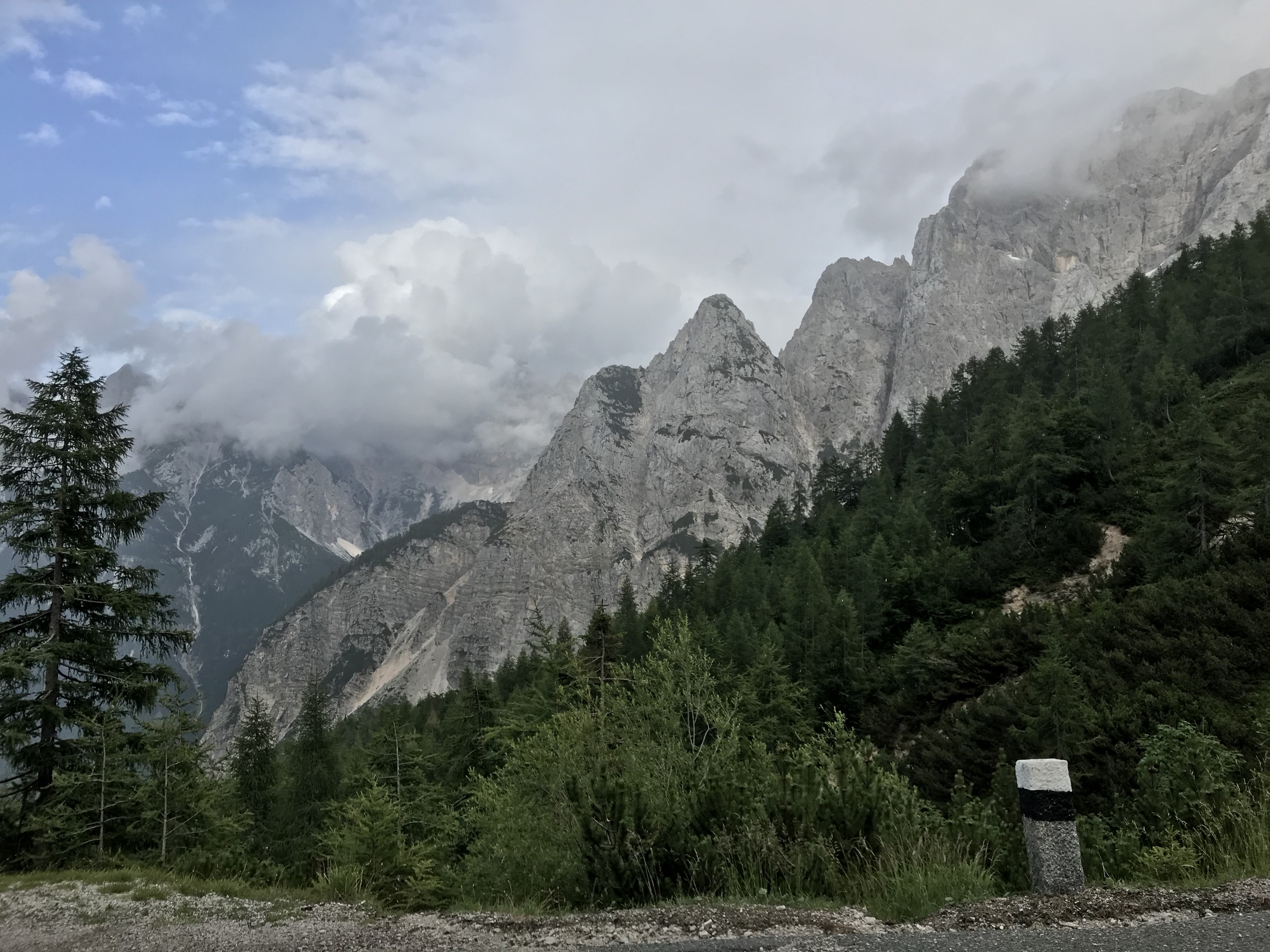 Last but not least, Joe followed his GPS through Italy, while I took the overpass through the Triglav national park, which was 800m altitude up and down in just a few Kilometers, with sharp turns and wonderful views. We stayed in ‘Apartments Tatjana’ for 25,- per person, without breakfast, which we realised too late at night. The next morning we tried to find decent, carb-free breakfast, but none of the cafes had anything else than croissants or sandwiches, so we walked into Hotel Alp to jump onto the (unfortunately terrible) breakfast buffet. Next stop was the supermarket to get eggs, bacon and fruits for the next morning, to avoid this issue. 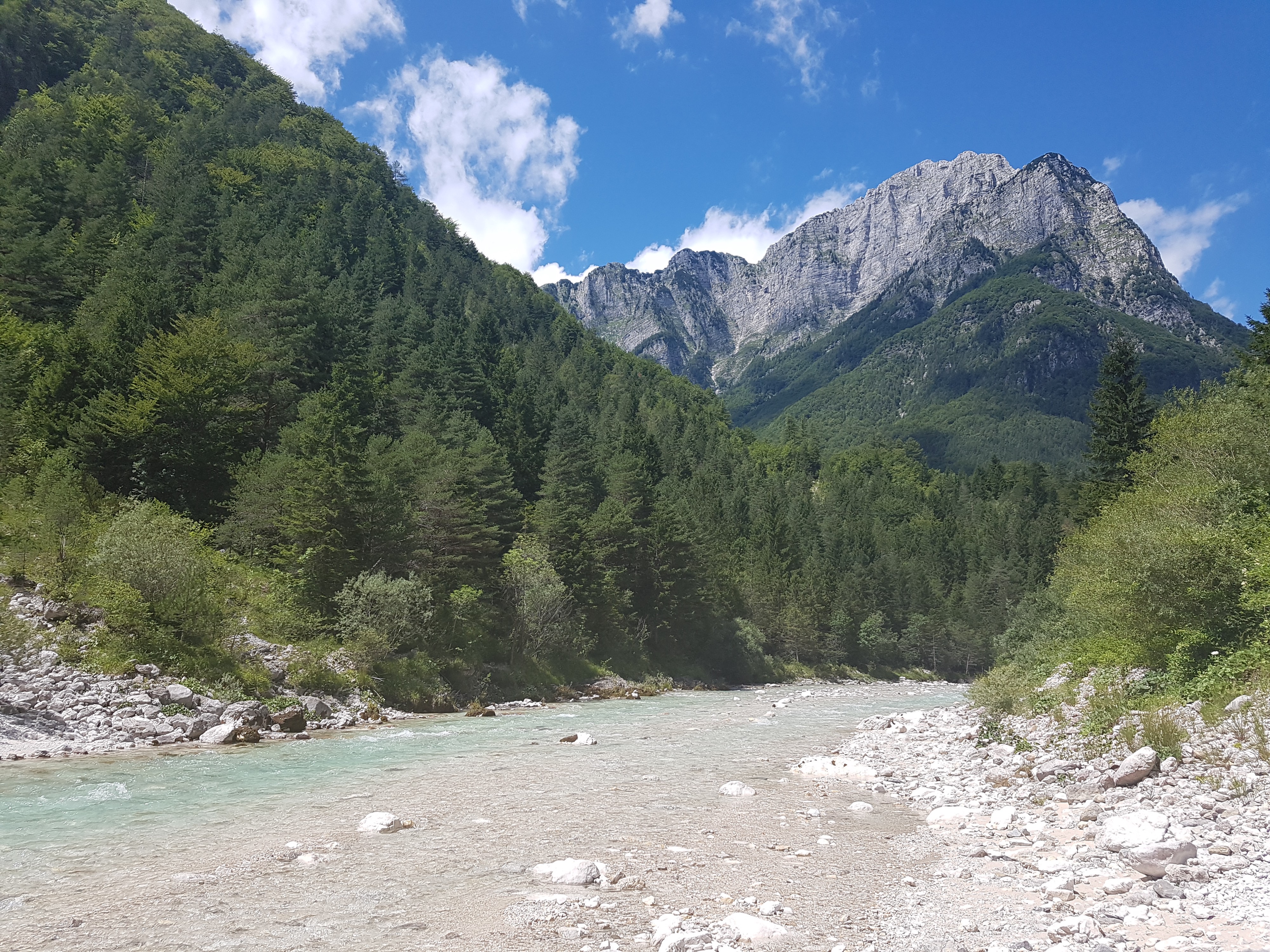 We were able to stay at Apartment Tatjana for another night and took off into the national park for a 4h hike, a relief, after 5 days sitting on the bike. 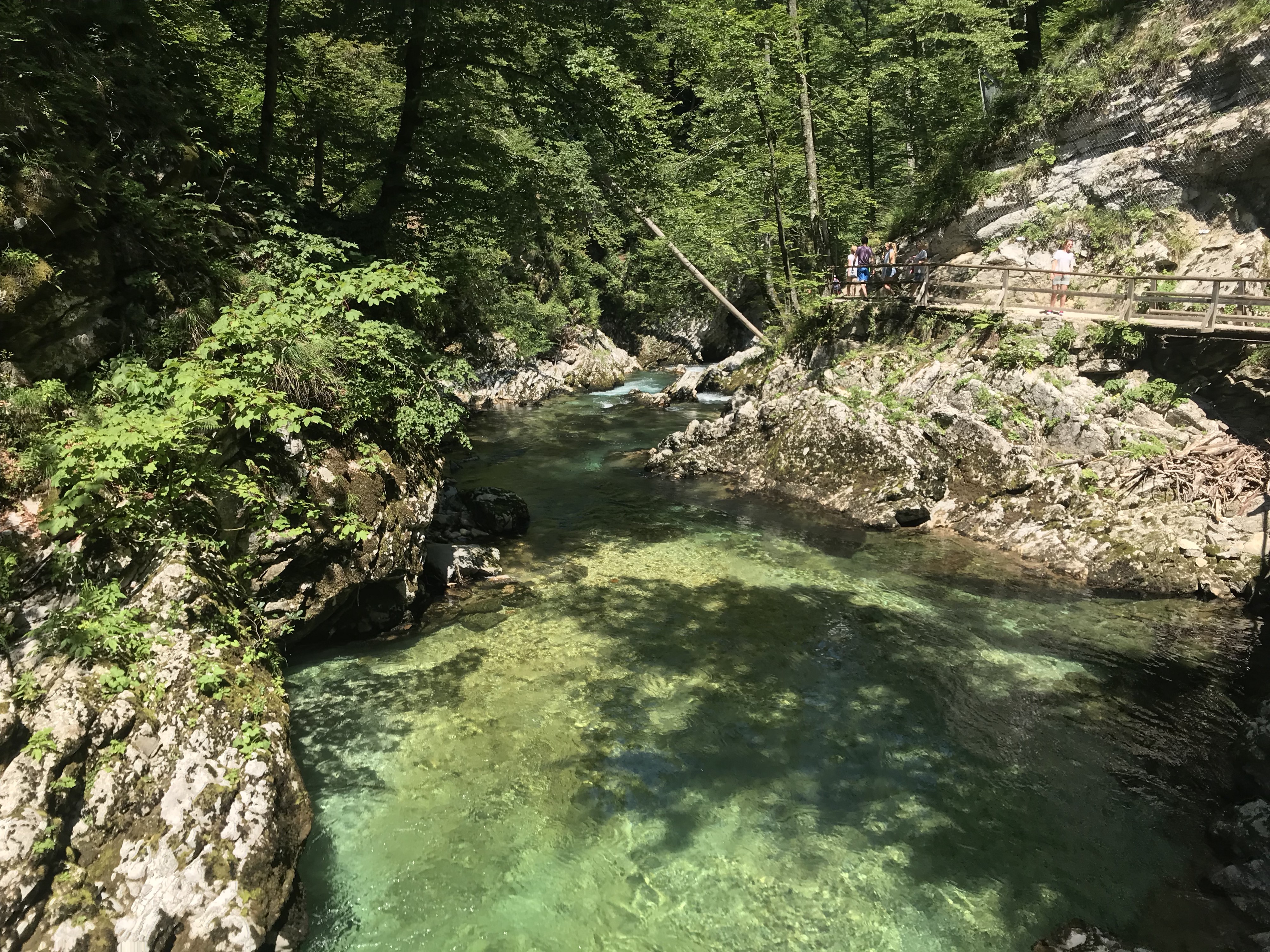 From Bovec, we traveled further east to Zgornje Gorje near Bled and stayed in Villa Vesna, a great apartment in the middle of the Pokljuka plateau in the Triglav National Park. We went for several activities like Horse Riding and Canyoning (that was amazing!) and enjoyed the nature, solitary and great meat at the nearby bar from the Vila. After some relaxing days we moved on towards Tolmin to attend the MetalDays 2017. 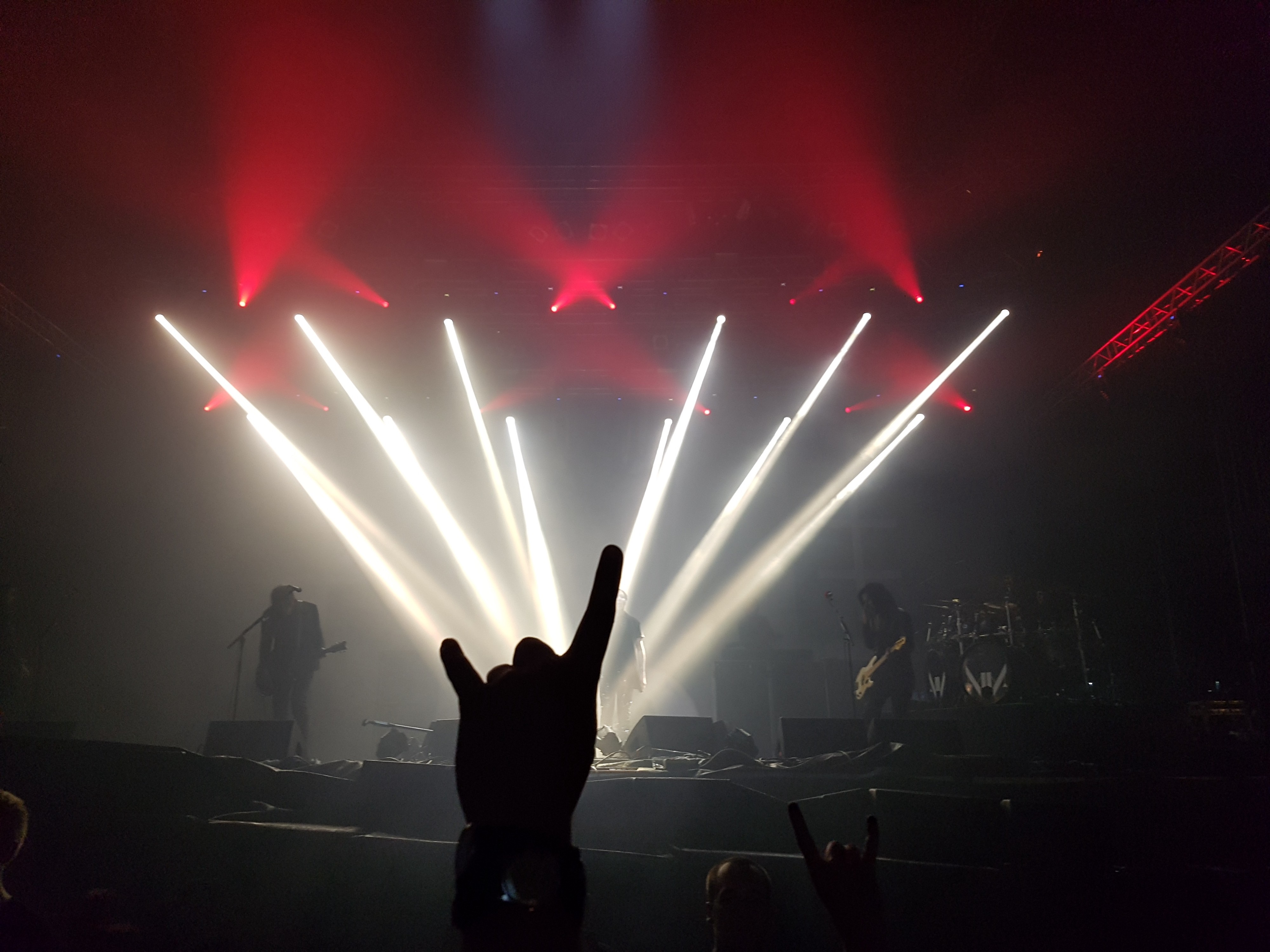 You can easily stay a week in or around Bled, there’s plenty of activities, amazing food and overall a very relaxed atmosphere. 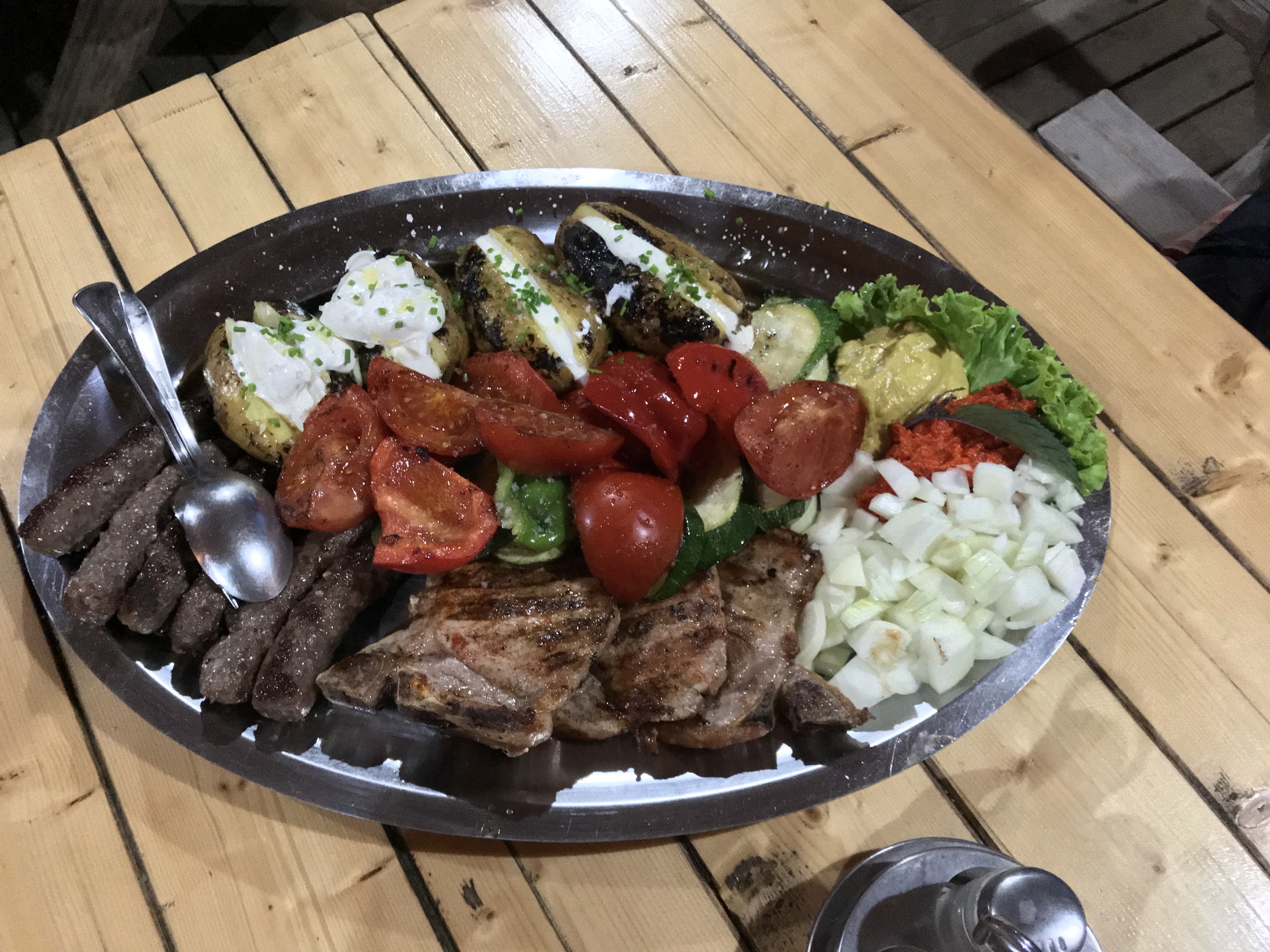 Meat plate at “Mooh Bar”, next to Villa Visna

The sad journey back to normal life took us again through the Dolomites in Italy, where we stayed near Canazei the first night and split up in North and South directions from there. My route was Canazei to Cannes, France and another 6–7 hours from there, as the holiday season began and there were almost 100km traffic jam from France to Spain.

I hope you find inspiration for your next trip here. If you have any questions, feel free to reach out https://twitter.com/patrickheneise.

A few items I found useful on the trip: